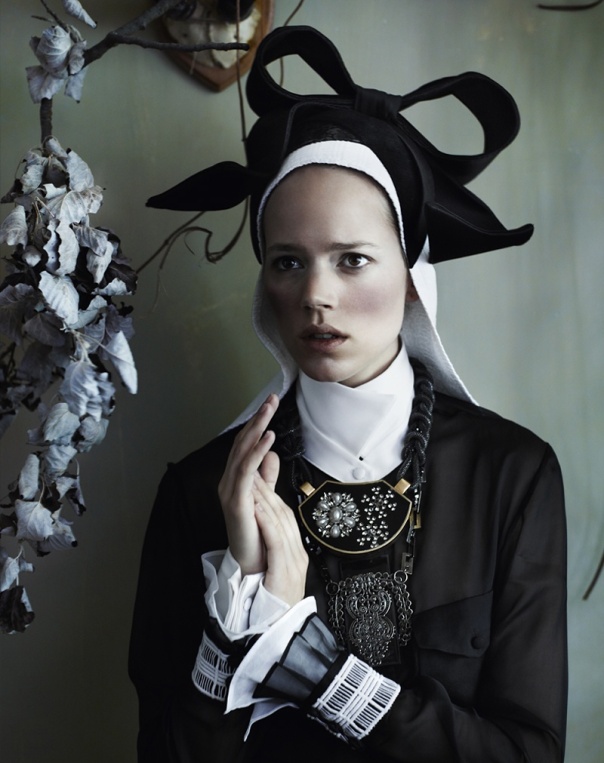 This is particularly breathtaking and refreshing for Testino as of late. Starring Freja Beha and Arizona Muse, this editorial had potential to be yet another stereotype casting of the two, but the direction and styling alone is gorgeous. Freja emits slightly more emotion and plays her role with more emphasis than Arizona does, but I can’t say I expect much from Arizona already. Regardless, the two make for a stunning shoot in Chanel and in – brace yourselves for my regular fap to Givenchy – but the iris print in the Givenchy photographs so well. I’m dying for the pops of color in the otherwise use of black and white. 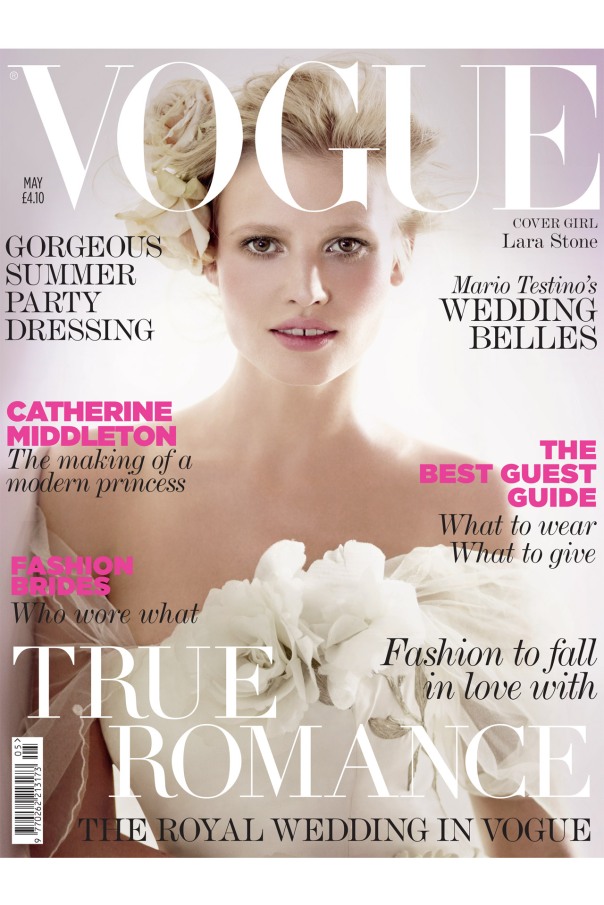 Glowing, perfection, ethereal goddesses. This is how I can describe these three covers in the wedding-themed UK Vogue. Testino shot Lara, Natalia, and Freja perfectly as light, lovely ladies. Many people had a problem with Lara’s expression, but  I don’t believe she could be any more pretty and fare-skinned and soft. The three do have this sort of dewy complexion about them that is rather perfect. 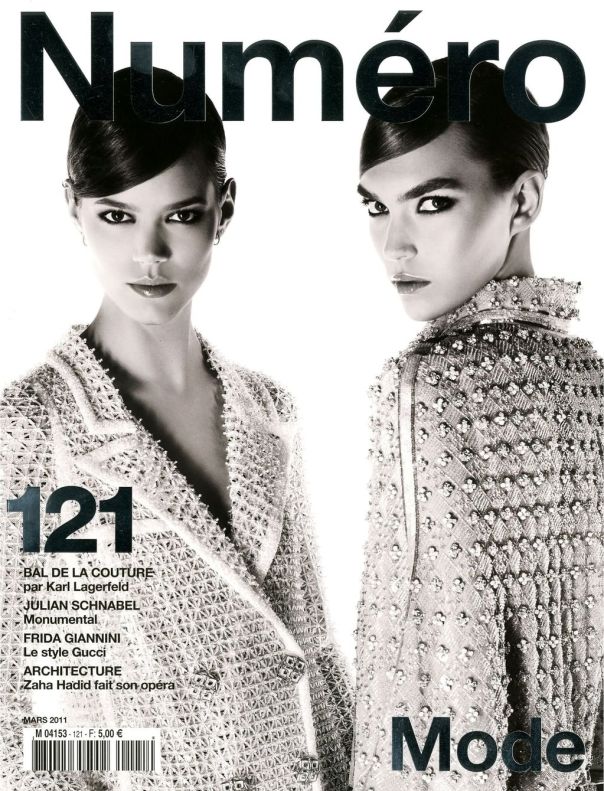 Arizona isn’t my favorite newcomer by far, but editorial-wise, if she can bring it, girlfriend better to make up for her jank runway walk. I absolutely despise her runway and wish she’d go into hiding. Unfortunately, I believe the Paris runways will only bring more Arizona, but I’m hoping Freja makes her back to them, since she’s been absent and quiet all month, like most seasoned vets.

Now for the cover. I love it. There’s exquisite Chanel and the two look flawless. The editorial is much better with haute couture pieces of Givenchy, Elie Saab, and Armani Prive. We can’t wait for the high quality editorial images of what seem to be fairly impressive. Stay tuned. 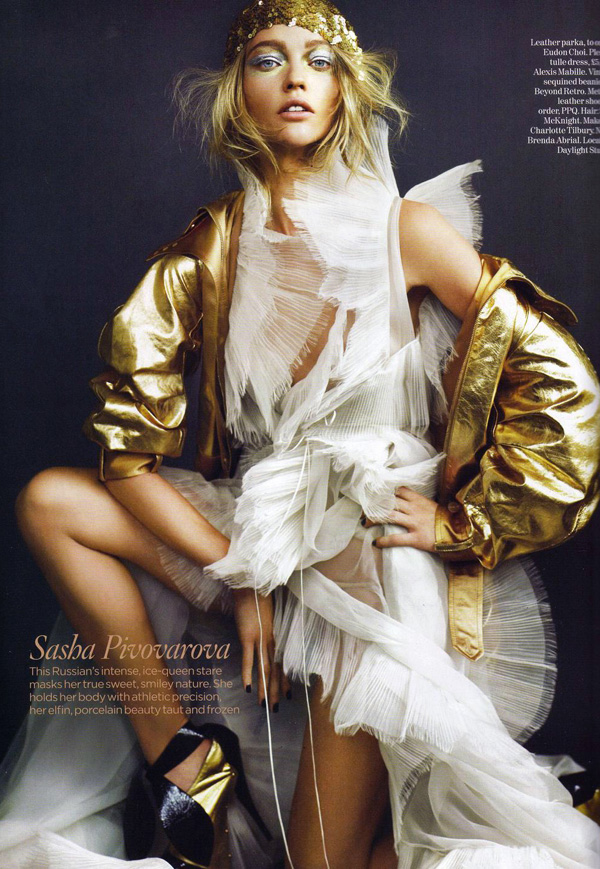 How fabulous are these girls? Remove Carmen and Edie with maybe Abbey, Anja or Natasha and we have a perfect list in this UK Vogue dedicated to stars. True supermodels Kate Moss, Naomi Campbell and Claudia Schiffer are joined with seasoned veteran Angela Lindvall and a list of my favorites. Golden and beautiful. 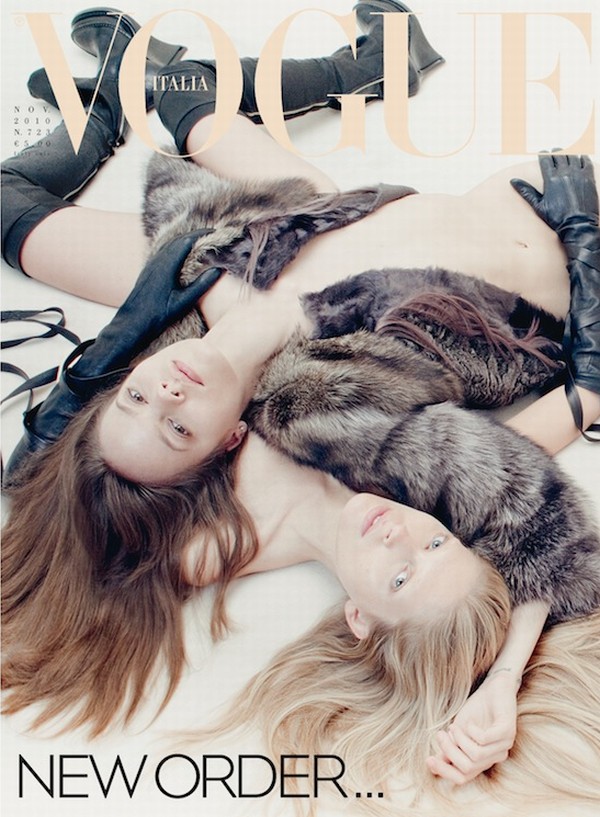 I’m sort of in love with this fold-out cover of Vogue Italia. The soft lighting and the position of the models works so well. 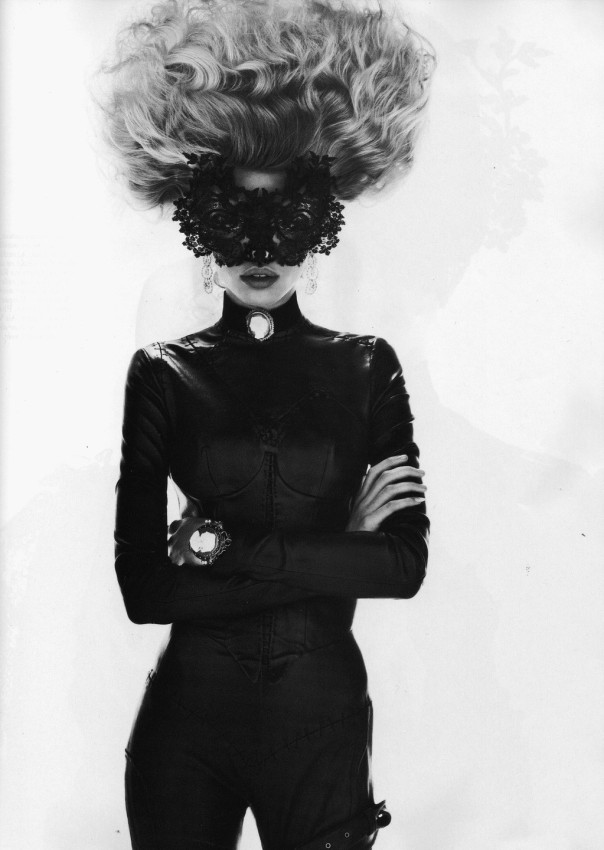 Let’s kick of everyone’s week with a breathtaking and dark masquerade, lensed by Mert & Marcus. The 90th Anniversary issue of Vogue Paris will be in my possession as soon as I can attain it in this college town. This is one of two editorials featuring cover model, Lara Stone, and she is joined by an elite cast of models. Carine handled the styling quite superbly; the skeleton, the Givenchy crown of thorns and the Treacy creations are such wondrous and what my dreams are made of. Magnificent. 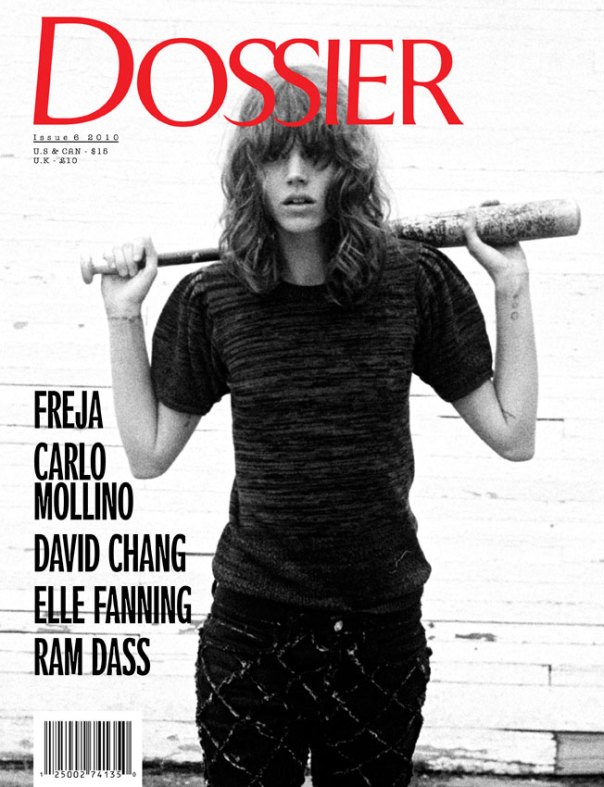 This is exactly how I would picture Freja normally. She may be channeling something androgynous, part ’70s Dazed and Confused, so maybe it’s just the hair that has been found on Daria, Anja and formerly on Abbey Lee. 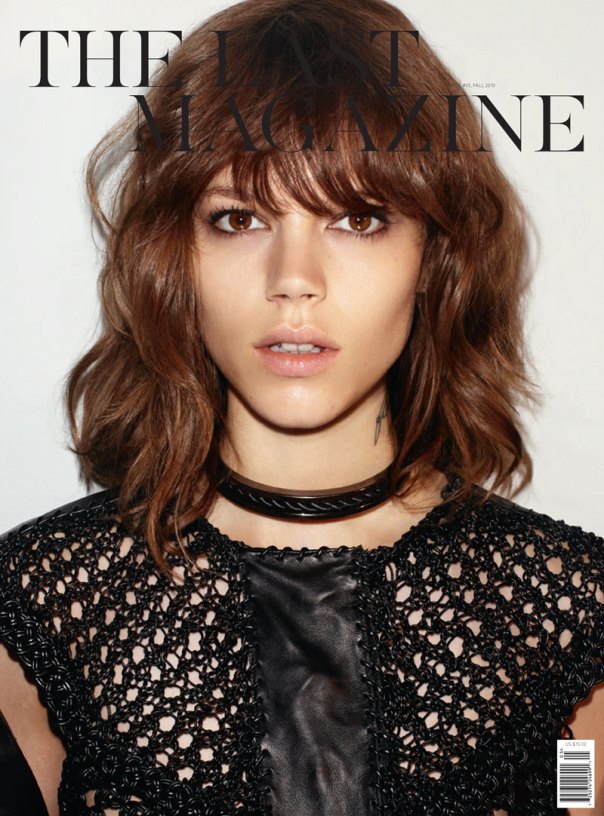 Anja wears Altuzarra and Freja wears Graeme Armour on the F/W double covers of The Last Magazine. Both have been sporting this ’70s-influenced hair, yet in these portraits, Freja looks softer and more feminine than Anja, who seems to be looking much harder. Role reversal. I love it. The intensity of the eyes speak wonders to me. 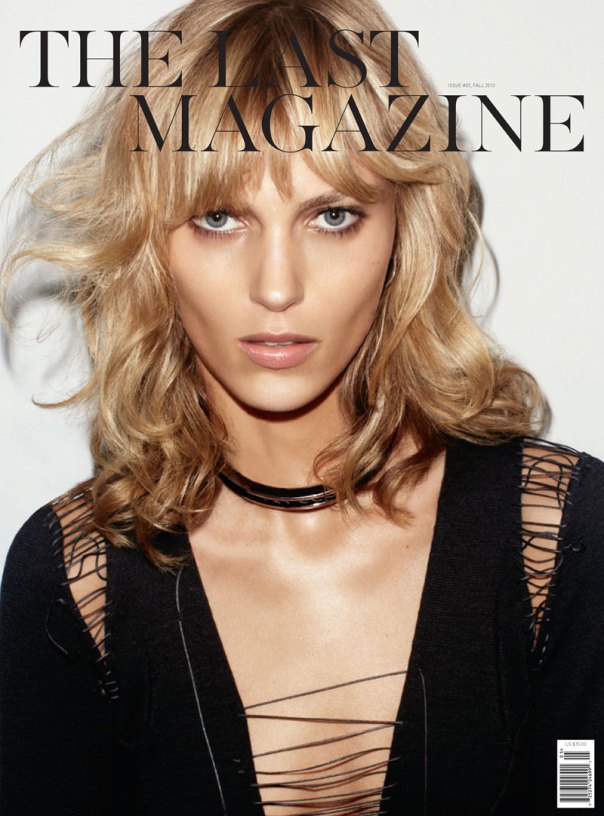 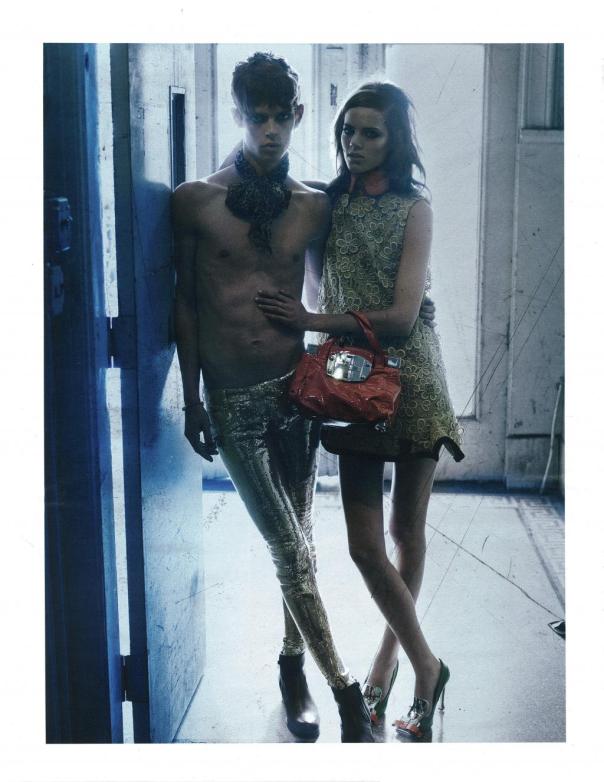 I almost deleted this editorial from my computer when I realized I never even posted the set. Talk about close call and one added attempt to battle premature Alzheimer’s and dementia, but such is life.

Freja and Dan look pretty fabulous in their fictional rocker romance, but the real focus, or at least to my eyes, are those absolutely ravishing, gold sequined Balmain pants that Dan is wearing. I remember Natasha Poly wore those stunners down the runway in March and now really need a pair. Where will I wear them you ask? Simply to wash the dishes, do my grocery shopping, or possibly while watching some delicious crazy “satchels of gold” on Bravo. One really doesn’t know the outcome of sequined pants, but the outcome obviously doesn’t come short of fucking fantastical. 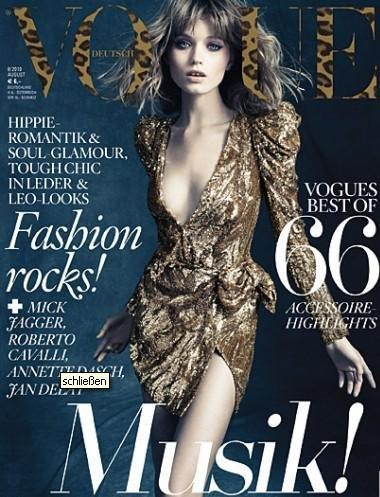 Freja, Lagerfeld’s darling, is turning out to be a driving force with her third major Vogue cover this year. If only she could get the US edition.

More details at the sources

The Haute Man
Create a free website or blog at WordPress.com.